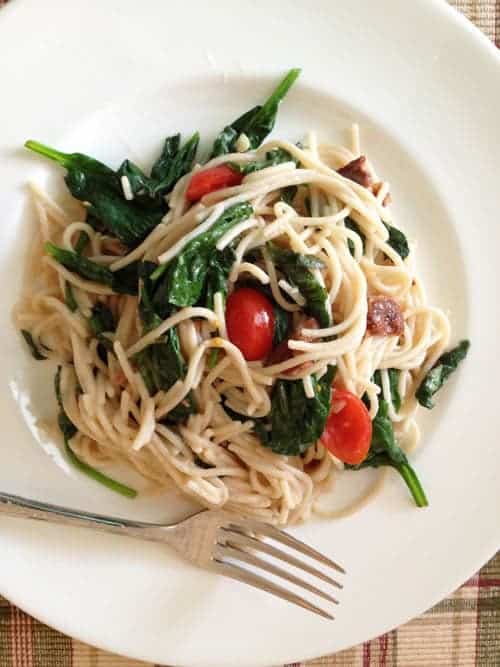 On my list of favorite summer foods, BLTs are right at the top. This easy weeknight pasta came about when I wanted a BLT but (gasp) I didn’t have any gluten-free bread in the house. For once, it was a good thing that I was out of bread because this recipe is awesome. To make, simply boil a pound of pasta. Toss it with a pint of halved grape tomatoes, sauteed baby spinach (the stand-in for the “L” in the BLT”), and crumbled bacon. If you’re feeling frisky, add some chopped basil or a generous shake of Parmesan cheese. That’s it.

Oh, and as for that baby spinach. That’s what I use. Any green leafy vegetable works (and tastes great!) in this pasta. Use what you love and then tell me about. 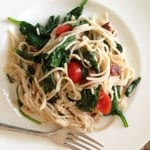 For this pasta, I love the flavor of uncooked tomatoes. To heat them up just a little, I place the tomatoes in a medium bowl. After I cook the spinach, I place the hot spinach into the bowl on top of the sliced tomatoes. It warms the tomatoes just enough to help them release their juices. For the “lettuce” part of the BLT, I use baby spinach. Any leafy green vegetable works well and tastes great in the recipe. Use whatever you fits your diet.
Prep Time 10 minutes
Cook Time 30 minutes
Total Time 40 minutes
Servings 4 -6
Author GlutenFreeBaking.com