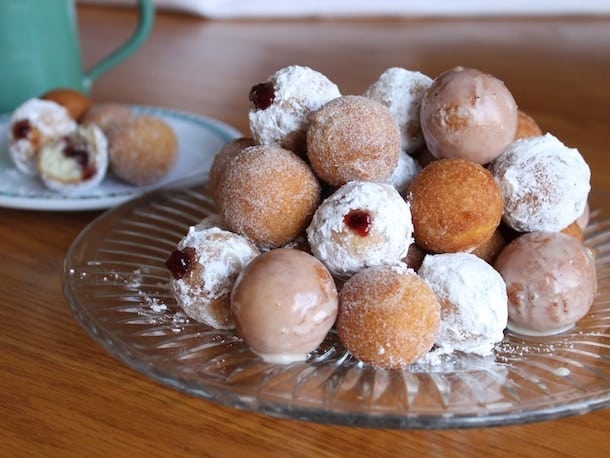 As a kid, I knew one thing about Hanukkah: it included latkes and doughnuts and Christmas didn’t. This made me more than a little sad that my family didn’t celebrate the holiday. In my opinion, even the best Christmas cookie can’t compete with a latke or doughnut fresh from the fryer.

Thankfully my mom’s friend Judy provided all the laktes and doughnuts I could eat. This year I asked for her doughnut recipe—I didn’t want to spend another holiday season jelly doughnut-less.

Her reply showed Judy’s no-nonsense nature: “Tradition? No! My mother made regular doughnuts. Bites are just easier. I got the idea from Dunkin Donuts’ Munchkins. They were new at the time and my kids loved ’em.”

After I worked with the recipe, I understood what she meant about bites being easier. The recipe makes a soft dough. Not so soft that it’s hard to fry but soft enough that rolling it out into large doughnuts might present a challenge. The size of the doughnuts isn’t the only place Judy sidestepped tradition. Her doughnut bites are cake doughnuts—yes, cake jelly doughnuts—instead of traditional yeast-raised doughnuts.

The resulting doughnuts, which include just a little nutmeg and lemon extract, are a delicately flavored and tight-crumb “home style” cake doughnut. (Actually, they are very similar to the Munchkins that inspired the recipe.)

Like Judy, you could squeeze a little jam into the finished doughnut holes. Or, if you aren’t in the mood for a jelly doughnut, dip them into a honey glaze or roll the doughnuts into granulated sugar and ground cinnamon. You could even leave them unadorned, even plain these doughnuts bites are a treat. 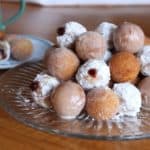 You want to keep the doughnut holes small, about two teaspoons each. Any larger than this and the center of the doughnut might be raw while the outsides are cooked.
Prep Time 30 minutes
Cook Time 5 minutes
Total Time 35 minutes
Servings 24 doughnuts
Author GlutenFreeBaking.com