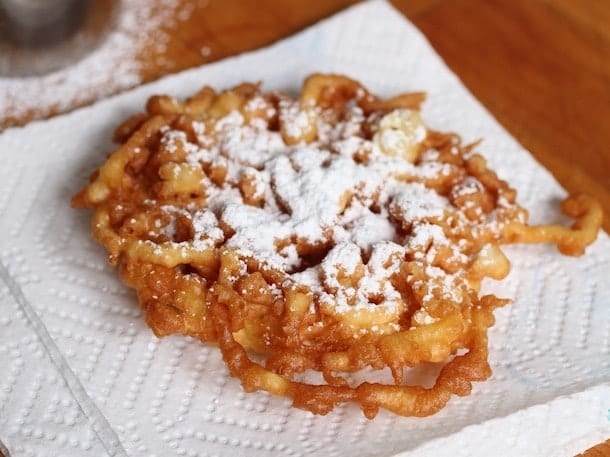 Who knew a funnel cake could make a person nervous? It’s not that I have a frying phobia, but I wondered how drizzling gluten-free batter into hot oil would work. Without gluten holding things together, would the cakes fry up into the classic lacy funnel cake shape? Or would I end up with solid disks of fried batter? Turns out, they work really well gluten-free. They key is to get the batter right.

Similar to a pancake batter, funnel cake batter needs to flow easily from a funnel. My first few attempts were far too thick. The batter plopped, rather than flowed. After thinning the batter, it drizzled easily into the hot oil. This is key to create the ribbons of fried batter that make up a funnel cake. It’s also what makes creating one a bit tricky.

With the batter running freely from the funnel, my first few cakes were funnel duds. Instead of cute, circular cakes, these were misshapen dough blobs. Funnel amoeba, if you will. Even after practice, I found making funnel cakes with a funnel to be a bit unwieldy. Don’t get me wrong, it works. But I wanted to play around with other tools to see if there was an easier way to make these treats.

Before attempting a funnel-less funnel cake, I swapped my large funnel for a small one. This helped a lot! The smaller funnel opening, about 3/8-inch, gave me more control over the batter as it ran into the pot. With more control, I created funnel cakes that were actually circular!

Since a small opening seemed key to a successful funnel cake, I wondered how a pastry bag would work. I popped a number eight (small) tip into a bag and heated up my oil. It worked well. However, when I handed the bag to a friend, who’d never used a pastry bag before or made a funnel cake, she found the bag troublesome to control, even after several attempts.

But the batter almost escaped from the top of her bag… Enter the squeeze bottle!

Most of my squeeze bottles have very small tip openings. One or two have a more generous opening, about 3/16-inch—an opening that’s still smaller than a funnel. I grabbed one, filled it with batter, and made a funnel cake. It was perfect. I handed it to my friend. She, too, made a perfect funnel cake! The squeeze bottles offered the control of a pastry bag while being much easier to handle—and refill.

Squeeze bottles turned out to be my favorite tool to make funnel cakes, yet all three tools did work to create funnel cakes. No matter which tool you use, keep these three things in mind: 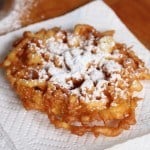 If your gluten-free flour blend doesn't include xanthan gum, don't leave it out. Use the amount called for in the recipe.