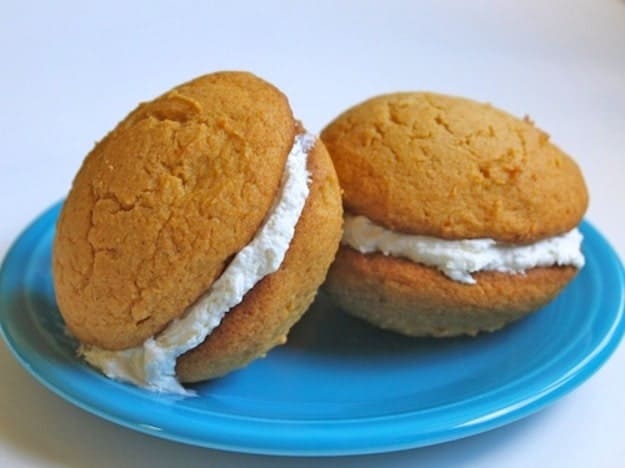 Gluten-Free Pumpkin Whoopie Pies or Why Do I Put Things Off?

I’m not sure why I resisted baking them. I think I believed that whoopie pies should be chocolate, not pumpkin. Silly, I know. Each fall, he’d gently suggest I make a batch and each fall I didn’t. Until now.

Of course, you know how this story ends. Now I’m kicking myself for waiting so long to make them. In fact, I think I like pumpkin even better than the traditional chocolate version. (My husband might have smirked when I told him this. But he was eating a whoopie pie at the time. So I can’t be sure.)

But enough about how I was wrong! Let’s talk about the pies! As with traditional chocolate whoopie pies, these gluten-free pumpkin whoopie pies are made by sandwiching two dense cakes  together with a light, creamy center. Which brings me to….

Most chocolate whoopie pies are held together with a filling made from butter and classic Marshmallow Fluff. I love that filling. It’s light and sweet and perfect.

For pumpkin whoopie pies, however, I wanted to do something different.  (And, if you are egg-free, you’ll love this change.) I decided to make the filling with whipped cream cheese. Yes! As you can imagine, cream cheese filling complements these pies perfectly.

Replace the two eggs with 2 tablespoons ground flax meal and 1/4 cup hot water. Whisk together the flax and water and allow it to stand for five minutes. Add as you would the egg.

Replace the butter with a solid dairy-free shortening
(like Crisco or Spectrum vegetable shortening) or lard. Use as directed. A liquid oil can be used to replace the butter; however, I found the cakes spread when made with oil and had a very moist—almost muffin-like texture—instead of the dense cake-like texture I prefer in a whoopie pie.

Use a dairy-free cream cheese.

Traditional whoopie pies are BIG. If you’d like a smaller treat, scoop batter, about 2 tablespoons each, onto prepared baking sheet. Reduce baking time from about 20 minutes to about 12. Check the cakes after eight minutes. 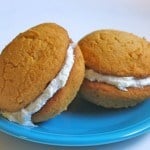 For the Gluten-Free Whoopie Pies