These gluten-free jalapeño poppers are stuffed with a cream cheese-bacon filling. They disappear fast! So be sure to make extra! 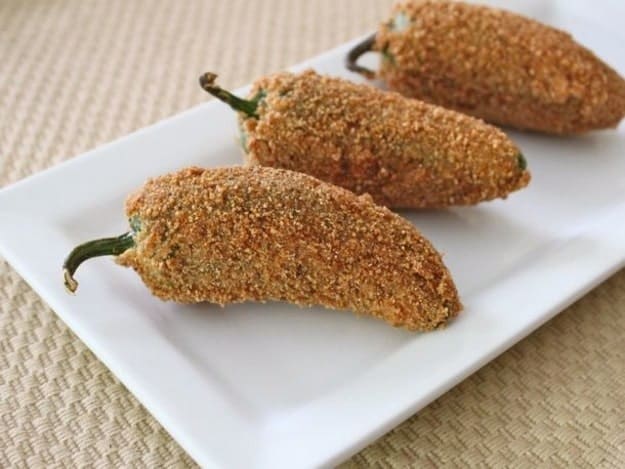 One thing to know before making a batch of jalapeño poppers: they are slippery little buggers! So slippery, in fact, that prepping them for frying takes a little extra care so that in the end, you have jalapeño poppers and not jalapeño exploders. 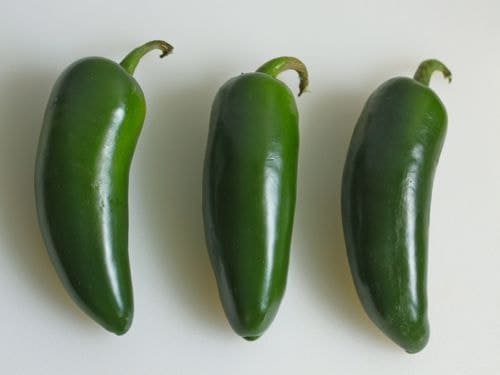 This time of the year, I get mine at the grocery store. Later this summer, when my garden produces peppers faster than I can keep up, I pick them fresh.

No matter where you get your peppers, you want to look for two things: an intact stem that gives you something to hold onto while breading the peppers, and no holes! Any holes allow the filling to leak out during frying. I usually select small jalapeño peppers because I like serving finger food that can be eaten in two or three bites, but that’s just preference.

Jalapeño poppers are really just a delivery system for the cheese-bacon filling, right? Since it’s a nightmare to fry a leaky jalapeño–think lots of hot oil “pops” while you deep fry–we want to keep all the filling inside the jalapeño until the first bite. 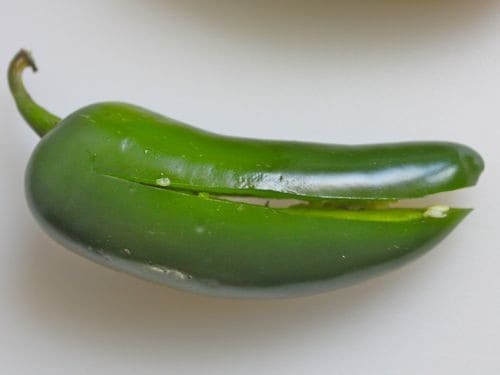 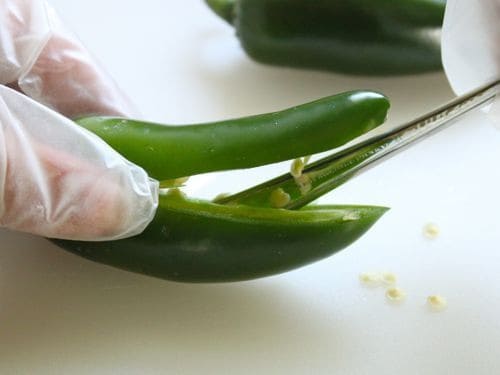 After you cut all the peppers, use the back handle of a spoon to remove the rib and seeds, this is where the heat lives. 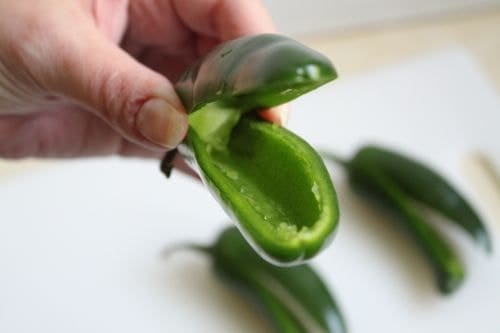 If you like spicy, leave a couple–really, just one or two–seeds in each cavity for a hotter popper. If you want your peppers hot but not fiery, take care to remove everything. 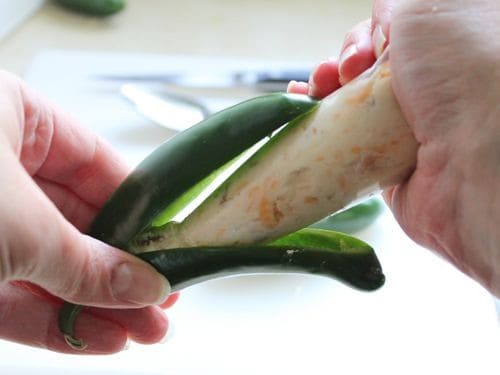 The pastry cook in me took one look at my problem and said, What are you doing?!? Grab a pastry bag. This allowed me to fill the entire pepper with no mess, and not one pepper split in half.

As you fill the peppers, the cream cheese filling softens and gets a little warm. If the poppers are fried while the filling is warm, it can ooze out of even the best filled and sealed pepper.

To prevent this: pop the the peppers into the freezer for about 15 minutes. You don’t want to freeze the peppers; you just want to chill the filling so it sets up.

Thanks to the jalapeño’s smooth skin, the breading on my first batch of peppers slide off in the fryer. This was easy to solve, I “double breaded” the next batch, just like I do with my gluten-free mozzarella sticks. By enrobing the jalapeños in egg and bread crumbs twice, a thicker coating encases the peppers that not only seals in the filling well but also keeps the coating on during frying. 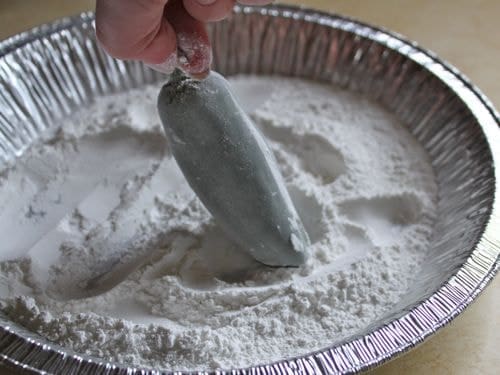 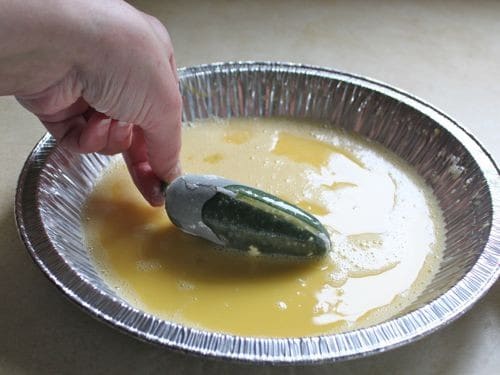 Then dip in whisked eggs. 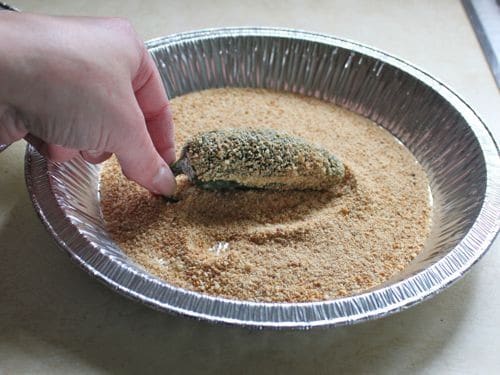 Roll in finely ground breadcrumbs. Try to avoid any bare spots. But try as you might, a few might sneak through. This is okay. 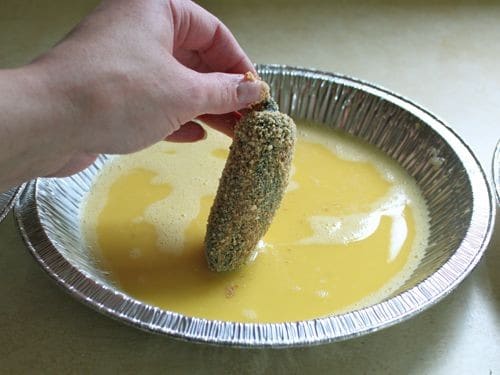 Return the pepper to the egg mixture. Again, use the stem as a handle. 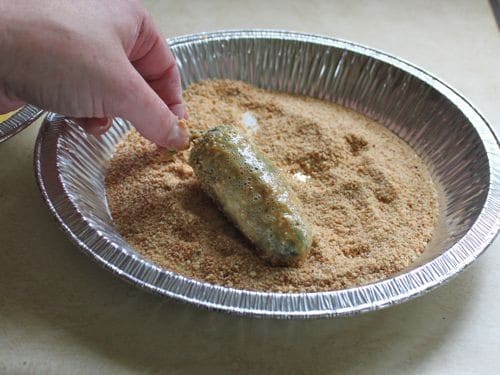 Finally, return the pepper to bread crumbs for the last time. 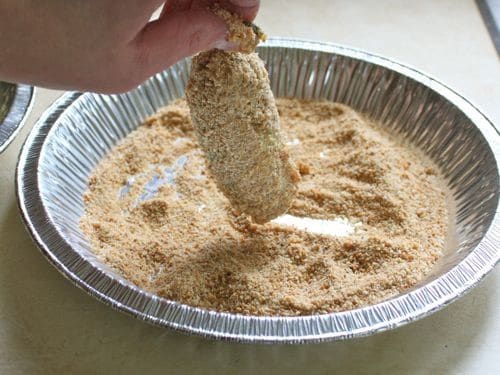 Take care this time to cover any bare spots.

Return the peppers to the freezer for about 10 minutes. (While the jalapeños firm up in the freezer, I heat my deep fryer.) Again, you don’t want to freeze the peppers, you just want the filling to firm up and the coating to set.

Finally it’s time to fry! Heat oil to 375°F degrees. This oil temperature gives the pepper a nice, crisp coating while cooking it until it’s tender but not mushy. The pepper retains a pleasant crunch, even after frying.

This piece first appeared on SeriousEats.com 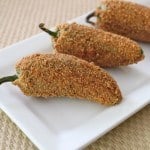