Gluten-Free Stuffing is easy to make! Follow these simple steps and your stuffing will be the star of your holiday meal. 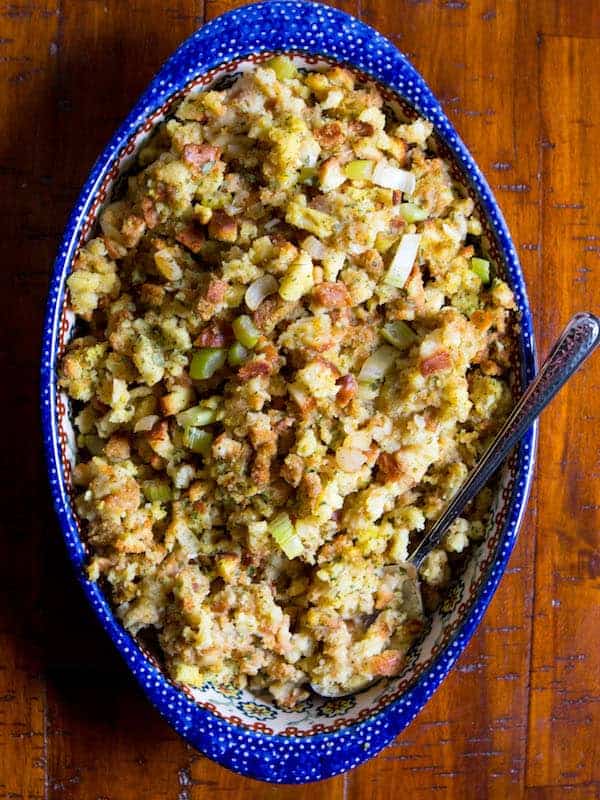 Ah, stuffing. It always feels like the most personal dish on the Thanksgiving table. If you want to make a gluten-free bread, I’ve got you covered! This recipe makes a classic gluten-free stuffing. But it doesn’t stop there! You can personalize how ever you’d like. Want apples? Sausage? Or my favorite, a chicken liver? Go for it! This gluten-free stuffing is flexible enough to satisfy even the pickiest of eaters!

How to Make Gluten-Free Stuffing: Step by Step

Here’s the low down on how to make gluten-free stuffing. Full recipe below. (and lots of explanation in between.)

How to Make Gluten-Free Stuffing: Start with Bread

Want to get gluten-free eaters talking? Mention bread. And in gluten-free stuffing, bread plays a pretty crucial role. Yet I don’t want the bread to steal the show. Rather, I like the bread in my stuffing to act as a supporting player. Gluten-free sandwich bread is perfect for the job because, thanks to its mild flavor, it doesn’t mute the flavors of the sausage, vegetables and herbs. Strongly flavored gluten-free breads, especially ones containing bean flours and/or buckwheat flour, often compete for flavor attention in stuffing, sometimes almost overpowering the other ingredients. That said, all gluten-free breads, from store-bought to homemade, multi-grain to white, work well in stuffing. So use a bread you love.

No matter what bread you select, cube and toast it before adding it to the stuffing. Left untoasted, gluten-free bread sort of falls apart, becoming mushy as soon as you add the stock to the recipe. Toasted gluten-free bread, however, behaves almost like wheat-based bread, striking that perfect balance of maintaining some individual cube integrity and slightly melting together—almost like a bread pudding.

To toast bread cubes, simply cut the loaf into thick slices, about a half-inch each, and cut those slices into bite-size cubes. Divide the cubes between two rimmed baking sheets and toast until the cubes are lightly golden brown and completely dry.Moisture is the enemy of bread cubes. If the cubes aren’t completely dry, the bread might get moldy during storage.

To ensure your cubes are dry, break one or two cubes in half. Feel the center. It should be dry, like the surface of a piece of toast. If it’s still damp, return the pan to the oven and toast the cubes a little longer.

And not only does toasting bread affect the texture of the final stuffing, it also affects the flavor. Toasting the bread cubes allows us to get rid of the flavorless moisture the bread contains and then replace that moisture with the flavorful broth we add to the stuffing right before baking.
There’s no need to worry about making your bread cubes the night before (or worse the day of) Thanksgiving. To make your prep easier, toast the bread cubes a few days before Thanksgiving. In fact, I’ve done it up to one week before the big day. Just be sure to allow the bread cubes to cool completely before storing them in a plastic bag.

How to Make Gluten-Free Stuffing: The Vegetables, Sausage, and Other Good Stuff

Time for an honest moment. This recipe isn’t my favorite stuffing recipe. Don’t get me wrong, I love it. Kind of like how I love chocolate cake but if a chocolate chip cookie were available, I’d select the cookie.

This recipe makes a classic stuffing with sausage and herbs. If you glance at the recipe list and think, “Where are the apples? We always have apples!” or “She’s using sausage? I hate sausage!” Here’s what to do: include ingredients you love. On Thanksgiving your stuffing should taste the way you want it to taste. (Hence my addition of chicken livers.)

How to Make Gluten-Free Stuffing: Broth Makes it Better

Just like selecting a bread you love, use a broth or stock you love. I use store-bought turkey stock. (Gluten often hides in store-bought stocks and broths. Be sure to read labels!) If you prefer homemade stock, use it.

How you add the broth to the stuffing is key. Dumping all the liquid over the bread cubes at once makes the edges of the bread soggy and leaves the center dry. Who wants dry stuffing? To avoid this problem, add the broth in two (or three) additions.

First add two cups of broth to the toasted bread cubes and gently stir the stuffing. After about a minute or so the bread begins to absorb the broth. Once this happens, add an additional cup of stock. Again, allow the bread cubes to absorb all the liquid. Then feel the bread. You want the bread cubes to be damp but not soggy. If the cubes still feel dry, especially in the center, add another cup of stock. The amount of broth needed for the recipe varies from loaf to loaf. Let your bread guide how much stock you add.

Fennel: Add one cup diced fennel. Cook along with the celery.

Leeks: Replace the onions with an equal amount of chopped leeks. (Leeks are milder than onions. If you’d like a more pronounced flavor, increase the amount of leeks to three cups.)

Mushrooms: Slice one pound of mushrooms. Sauté mushrooms in two tablespoons of hot olive oil. Set aside. Add to the stuffing along with the other cooked vegetables.

Apples: Add one cup peeled, diced apples. Cook along with the onions.

Nuts: Add up to 1/2 cup toasted, chopped nuts, such as walnuts, pecans, or almonds. (Nuts are a common allergen. Before serving, warn guests the stuffing contains nuts.)

Sausage: Replace the Italian sausage with another sausage. Chorizo, andouille, or chicken sausage are especially nice.

Chicken Liver: Replace the sausage with ten ounces of chicken liver. Cook the chicken liver in the olive oil, stirring constantly to prevent the liver from sticking to the bottom of the pot.

Bacon: Add four slices of cooked, crumbled bacon. (Or you can omit the sausage if using bacon.) Drain all but two tablespoons of bacon fat from the pot and cook your remaining vegetables in the bacon fat. 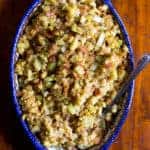