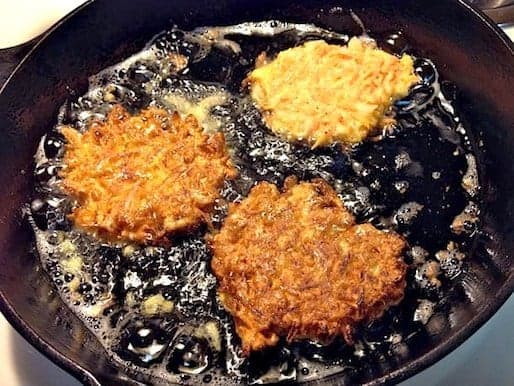 Ask anyone who makes latkes what they think of their recipe (or their mother’s or grandmother’s recipe) and most will tell you that “it’s the best.” And they’re right. I mean, we’re talking about fried potatoes here. So two years ago when I decided to create sweet potato latkes to celebrate Thanksgivukkah, I didn’t want a recipe that competed with my traditional potato latkes. After all, that recipe is the best, so why mess with it?

I thought about what I loved about latkes—besides everything—and realized that the grated onion, just a supporting player in my regular recipe, would pair really well with sweet potatoes. I jotted down a note to increase the onion. I also wanted the eggs to play a slightly prominent role. Usually I add only enough egg to hold the potatoes and onions together; for this recipe, I decided to add an extra egg or two.

But before I settled on just how much onion and how many eggs to add, I pulled out my grater. As I started grating, I remembered what Ruth, the woman who taught me how to make latkes, once said. “The most important tools for making latkes are strong hands and a kitchen towel.” Ruth would grate her onions and potatoes and then aggressively twist them in a kitchen towel to wring out excess moisture. As she twisted the towel tightly, her hands strained with the effort. Not only were her latkes nice and crisp, but they were dry enough that they didn’t splatter during frying.

After ensuring that my sweet potatoes and onions were as dry as possible, I sprinkled the mixture with white rice flour, salt, and a generous amount of freshly grated pepper. Then, I added four whisked eggs. The mixture appeared looser than my regular latke recipe but for an eggy latke, it looked about right.

The latkes fried up nicely. And after a few minutes in the hot oil, I was rewarded with tasty sweet potato latkes that were totally different from my favorite recipe. After eating a few latkes bites, I was sure that this recipe was the best recipe for sweet potato latkes. That’s when I knew I’d found a recipe I’d be making for years to come—even when Hanukkah and Thanksgiving don’t collide. 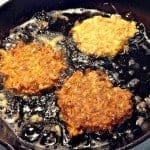